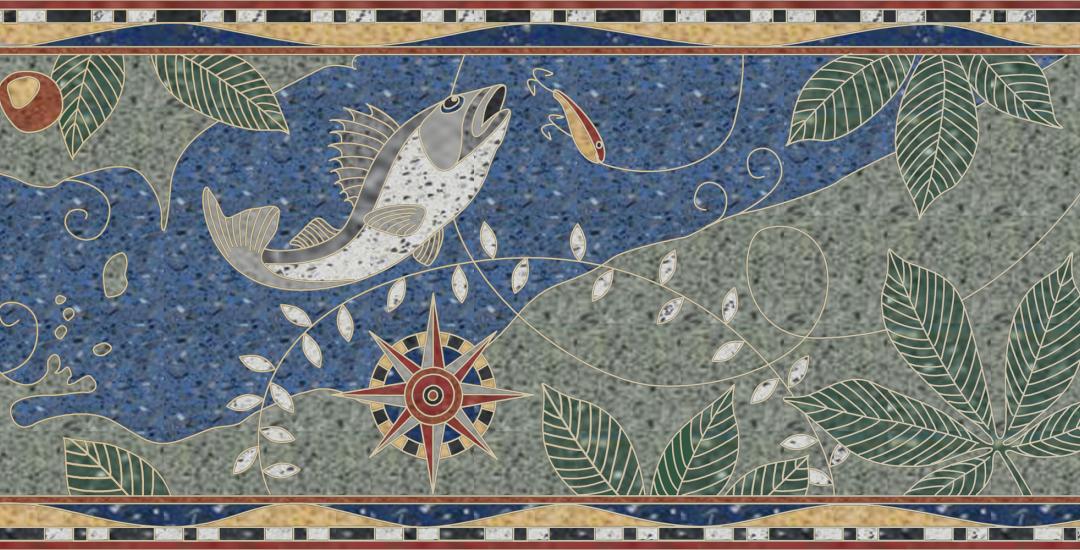 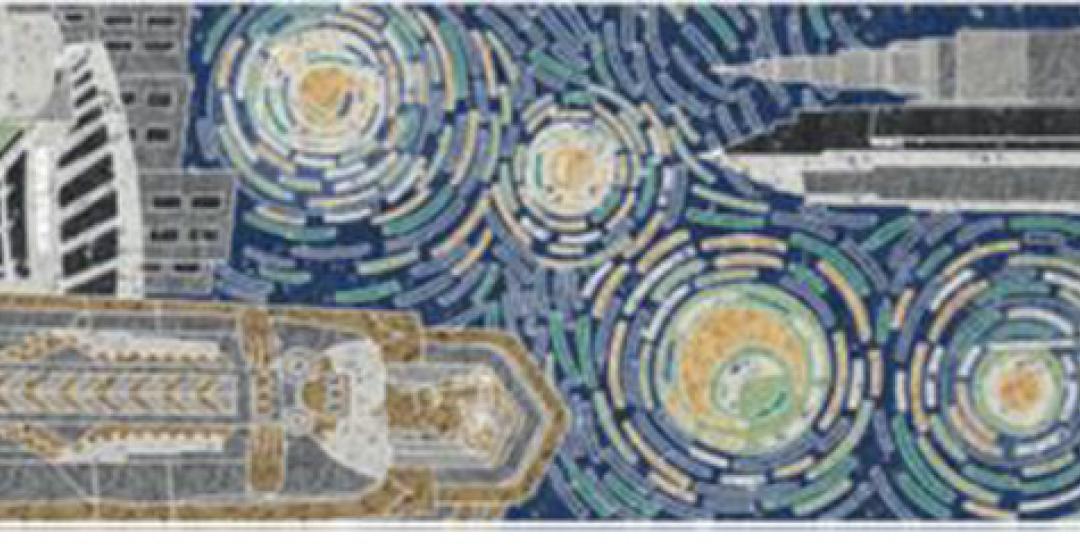 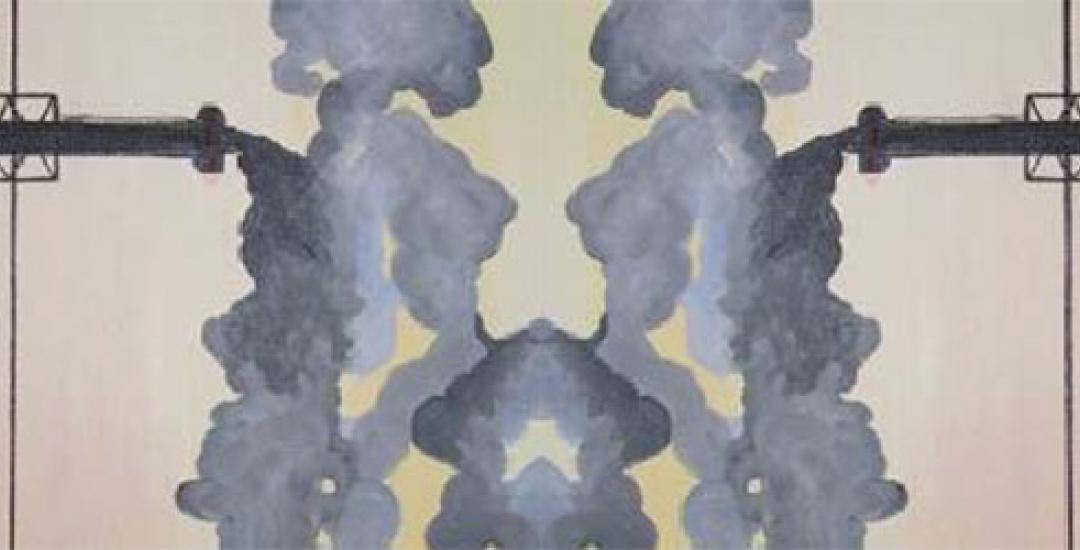 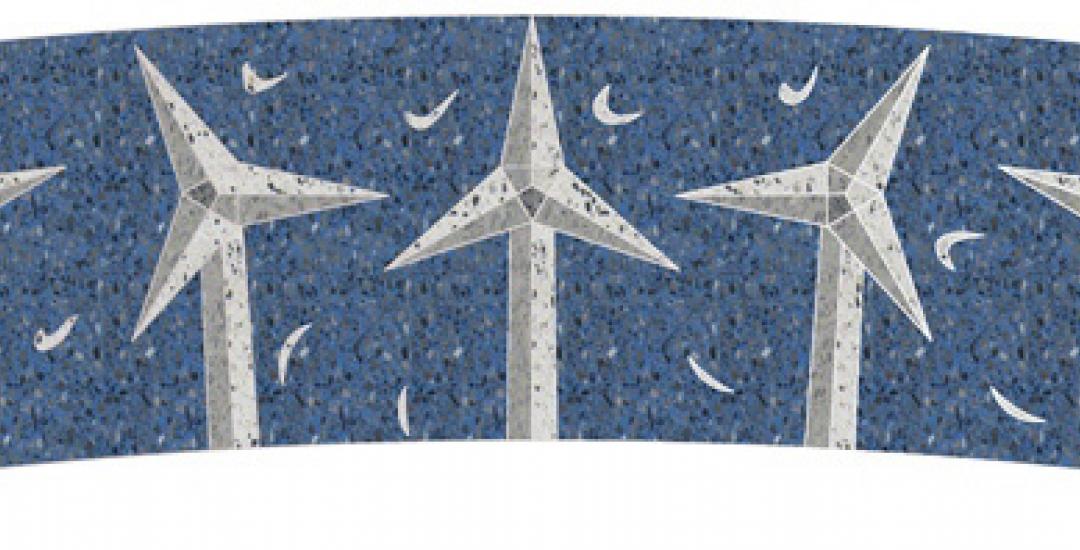 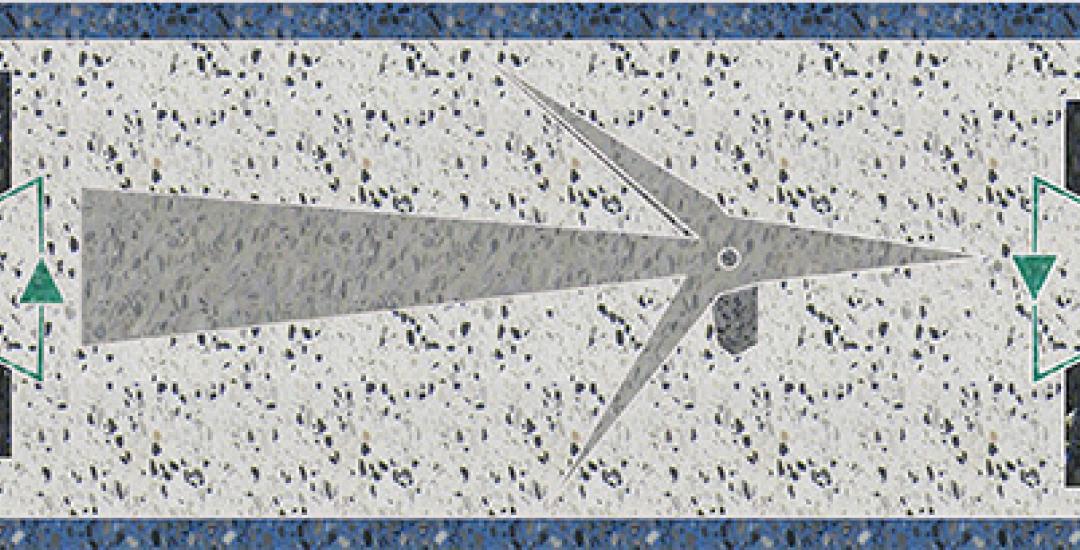 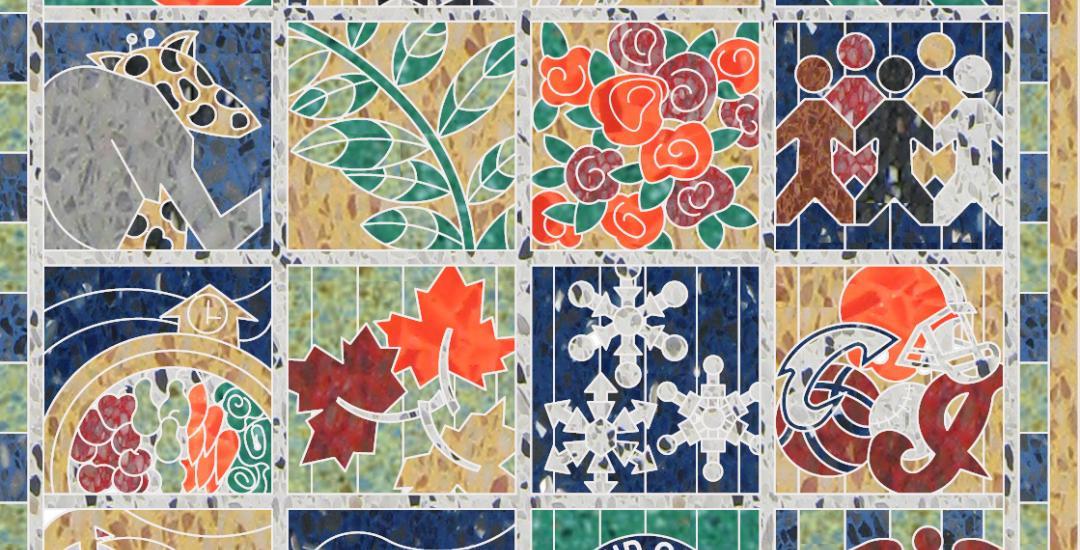 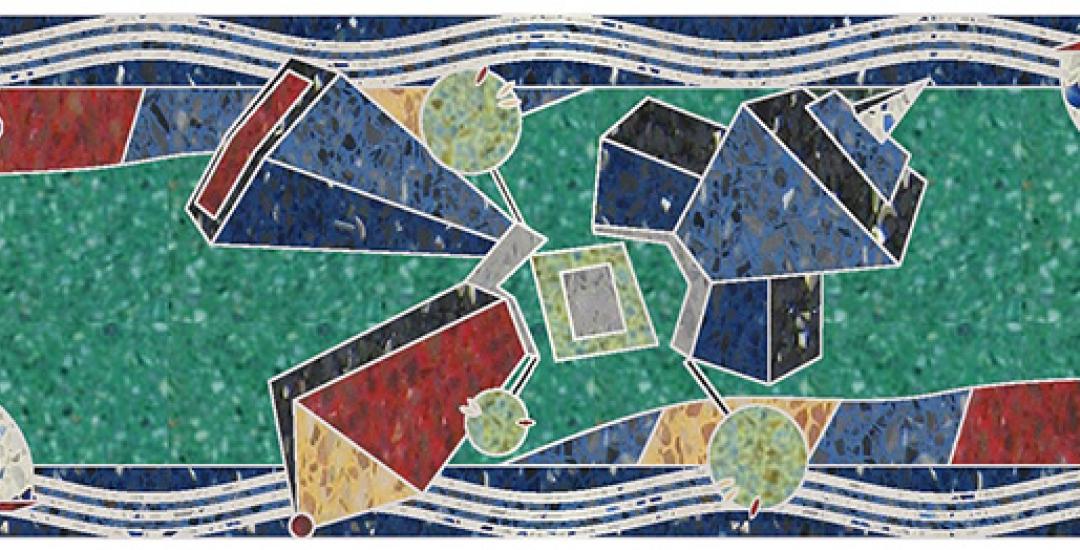 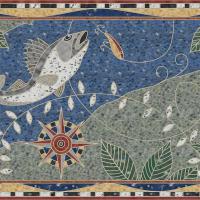 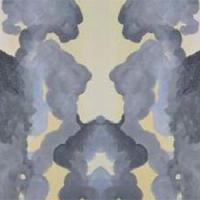 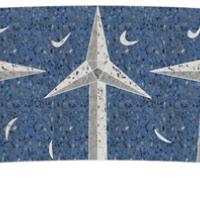 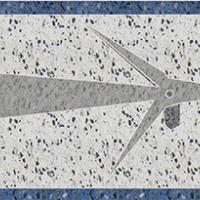 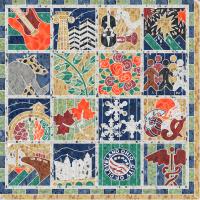 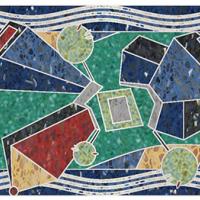 CLE embarked upon on an airport wide terrazzo installation construction project. As part of this flooring project, artwork was infused into the design of the floor. Rather than allowing design consultants to create the entire colored footprint, CLE issued a Call for Artists - Seeking local professional and/or amateur artists to submit their renditions of the theme “Cleveland, A Green City on a Blue Lake, past, present & future”. The completed artworks exemplify a physical, structural or dynamic that represents the uniqueness of Cleveland’s past, present or future. 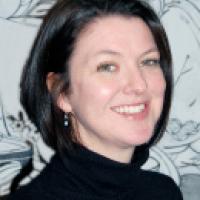 Claire Sullivan Gerdes is an artist and designer living in Cleveland, Ohio. She grew up in University Heights, a near east suburb of Cleveland.  In 1992 she received her BFA from the Cleveland Institute of Art, majoring in painting. She attended Lacoste School of Art in the South of France as part of her undergraduate studies. In 1999 she continued her design education concentrating on Textile and Surface Design, receiving an AAS degree from the Fashion Institute of Technology in NYC. She has also lived in New York City, San Francisco, and north of Chicago.

Currently, she is an independent designer and sole proprietor of Claire Sullivan Design. Her artistic focus is on public fine art, painting, and printed textile design for commercial manufacturing. Much of her work is targeted for Contract and Hospitality upholstery markets.

Claire is thrilled to participate in this celebration of her hometown. Her terrazzo design exemplifies Cleveland’s many attributes; including its world renowned institutions, outstanding natural resources, and its friendly, easy-going style.

The design is a celebration of Cleveland’s rehabilitated waterways, easy going style, and world renowned institutions!  The North Coast location is not only beautiful, but also a great place to live, learn, and enjoy.

The great Walleye is the quintessential symbol of Lake Erie and a grand reminder of our lake’s economic and recreational importance to Cleveland – historically, as well as, presently.  Northeast Ohio’s land has always been highly fertile, boasting some of the best growing soil in the country, and a great place to enjoy nature, especially through our Emerald Necklace’s Metroparks system.  For this the state trees were chosen; easily identifiable Buckeye leaves and seeds.

Alluding to similar icons and wayfinding signs one might find in the Airport, icons are used to symbolize Cleveland’s great attributes and institutions:

This contemporary and multidirectional walkway is a great way to show guests that we have much to share! 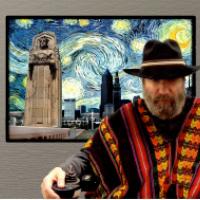 Sean believes the City of Cleveland requires more than a cursory glance in order to appreciate its real beauty, depth and complexity.  He adds that it is a city whose past includes historic significance, influence, and grandeur.  As a native son, he has invested hopes and dreams in Cleveland.

The Starry Night in Cleveland image is intended to depict the past, present and future in a single frame.

He believes the City of Cleveland requires more than a cursory glance in order to appreciate its real beauty, depth and complexity.  He adds that it is a city whose past includes historic significance, influence, and grandeur.  As a native son, he has invested hopes and dreams in Cleveland.

The Starry Night in Cleveland image is intended to depict the past, present and future in a single frame. 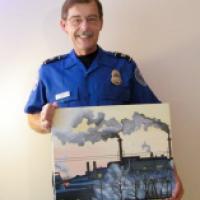 Tom has had a lifelong interest in art, but never felt confident in his talents to seriously pursue it.  With no formal training, he began a few years ago painting with acrylics, also producing a few charcoal and pastel portraits of his co-workers.  They were more than pleased with his effort and encouraged him to continue with his new hobby.

Although Cleveland strives to be a “Green City on a Blue Lake”, he think it’s important to remember our industrial heritage.  This scene of a city awakening to smoking stacks and rising steam was a familiar site to thousands of Cleveland commuters passing the steelyards on their way downtown.

In his early career he worked as a Hulett-type-ore-unloader operator on Whiskey Island.  For 24 years he operated the behemoth unloaders, scooping iron ore from the bellies of giant ships. Self-unloaders finally shut down the Huletts in 1993 thrusting him into other endeavors.  For the last four years he has worked as a Transportation Security Administration Officer at Cleveland Hopkins International Airport.  “To have one of my works selected for the very floor I walk on daily, is an overwhelming concept.  I am both proud and humbled.” 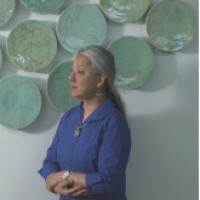 Eva Kwong was born in Hong Kong and has lived in Northeast Ohio since the mid-eighties. She is an adjunct faculty at Kent State University. She received her BFA from Rhode Island School of Design in 1975 and her MFA from Tyler School of Art in 1977. She has lectured and exhibited extensively throughout the country and abroad.

Her artwork has received awards from the Ohio Arts Council, National Endowment for the Arts, Pennsylvania Council on the Arts and Arts Midwest. Her artwork is in private and public collections like the Mint Museum of Art and Design, Minneapolis Institute of Art, Finnish Craft Museum, Racine Museum of Art, Shigaraki Ceramic Art Museum, and the Butler Museum of American Art, etc.

This design is based on the past, present and future of Cleveland as a Wind Turbine City.

This design incorporates the fact that Cleveland was one of the first cities to use wind turbines to generate electricity.  In 1888, Charles F. Brush powered his mansion on Euclid Avenue with his wind turbine generator.  The present and future of Cleveland is based on the wind turbine research being done at Cleveland State University and at Case Western Reserve University; this renewable energy research of using wind will power Cleveland into the future.

The image of a row of wind turbines against the blue sky is used.  The wind turbines rotate as you walk down the terrazzo floor to give it a sense of movement from the wind being blown across the Lake. 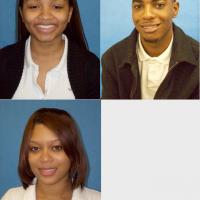 Location: Concourse B – Gate B6

Maria Cuadra was born on May 3, 1992 and raised in Cleveland, Ohio. Her parents, Edwin and Deborah Cuadra, are both Cleveland Police Officers. She is currently a Senior at Whitney M. Young High School for the Gifted and Talented. She plans on majoring in Earl y Childhood Education at either Miami University or Spelman College. Her goal is to become a teacher and start a non-profit organization focused on giving children in Third World countries an opportunity to receive an education.

Eaon March was born October 22, 1992 to Sharon Gordon and Kevin March. Eaon was born in South Beach Miami, Florida and his parents were born in Jamaica. He recently move back to Cleveland from New York, New York. Eaon is currently a Junior at Whitney M. Young High School for the Gifted and Talented. Some of his hobbies are playing sports and drawing.

Chae Simpson was born April 11, 1992 to Tina Simpson and Marcus Tate.  She was born and raised in Cleveland, Ohio.  She is presently a Senior at Whitney M. Young High School for the Gifted and Talented.  She plans to attend either Kent State University or Baldwin Wallace College to major in Chemistry and minor in Criminal Justice.  She hopes to fulfill her dream of becoming a Crime Laboratory Analyst and a Crime Scene Examiner.  Her future goal is to become a Medical Examiner.

When people depart from their plane ride and step into the Cleveland Hopkins International Airport, the artists wants them to get a feeling of this great City.  To see  the city as “the green city on a blue lake”.  They also want to give them a feel of the past, present and future of Cleveland.  To represent this, passengers will see the smoke stacks that represent Cleveland’s past.  While walking future up the artwork, the smoke starts to blend into the recycle sign with a wind mill on top; which symbolizes the future of Cleveland being “green”.  On top of the wind mill is a building that is in downtown Cleveland representing the present. 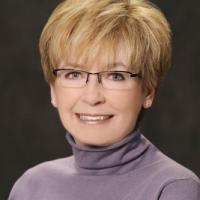 Betsey Nims Freidman is an artist-turned lawyer-turned artist.  She has lived and worked in the Greater Cleveland area for most of her life, presently living and working in Shaker Heights.  As an art major, with a specific interest in graphic design and textile art, Betsey graduated from DePauw University, studied here and abroad and worked in a number of art departments of commercial and public relations companies.  While raising her family, she changed paths and attended law school.  A magna cum laude graduate and law review editor of the Cleveland State University College of Law, she practiced law for twenty-six years, the majority of her career at the Ohio Attorney General’s Office where she served as Senior Assistant Attorney General. The selection of Cleveland Blocks! for the CLE Terrazzo Art Project has recognized her return to her creative passion for graphic design, with a particular specialty of incorporating recycled fabrics and geometric shapes in her work.

The artist specifically chose to submit this design location because it is in the shape of a square.  Inside the area are sixteen blocks, representing sixteen facets of Cleveland.  Squares are comforting shapes, portraying a semblance of order, as well as stability, strength and equality.  Squares are dramatic and fun.  Squares within a square allow one to focus on one item at a time, but also allow the observer to see how all the parts integrate to form a whole.  The sixteen block design shows the uniqueness of Cleveland in a concise, colorful and exciting way.  Green and blue are the featured colors, consistent with the project theme of Cleveland, a Green City on a Blue Lake.

Cleveland Blocks!  For a Green City that Rocks! 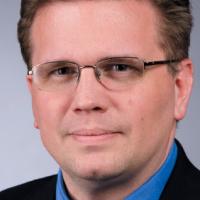 Mark Rook has 20+ years of experience in the graphic design field, serving as a Graphic Designer, Art Director and Creative Director for Cleveland-area publishing, health care and consumer products companies. In addition to his design talents he is an accomplished artist and illustrator.

His graphic design work has been recognized by such organizations as ASBPE (American Society of Business Press Editors), the Press Club of Cleveland and BPAA (Business/Professional Advertising Assn.). Mark’s passion for juvenile illustration and artwork is expressed through his paintings that are part of permanent collections at University Hospitals of Cleveland, Rainbow Babies and Children’s Hospital, Akron Children’s Hospital and Kaiser Permanente. He has had one-man shows at The Butler Institute of Art, Youngstown and Bluffton College, Bluffton, Ohio.

Mark holds a BFA in Graphic Design from The University of Akron. He lives in Olmsted Falls with his wife Barbara and their two children, Matt and Libby.

Cleveland:  Its emerald necklace swathes the City with lush green foliage; its lake provides spectacular views with sailboats dotting the horizon, while providing life-giving water for the City.  Wind turbines provide clean energy.  Cleveland is green living from all angles.